Disclaimer: Before I even start this post, I do not have any honey yet… I will be letting the bees keep whatever they have made so far in the hives for winter. I just happened to help another beekeeper today at Park Heights and took some photos of the process. Her hives are a more mature than mine and this happens to be her first collection for the year. I thought it would be neat to show the end product.

So, let’s start from the beginning, below are photos of the hives at the main site of the Park Heights Community Health Alliance. There are currently 8 functioning hives that support the community garden for active pollination.

Laverne is another Baltimore City beekeeper that has four hives at the site and she has collected one shallow box of honey for the CSA Group (Community Support Agriculture) at Park Heights.

Before we harvested the honey, we checked on the status of all of the hives and treated for hive beetles. If you notice in the photo above she has a few small hive beetles and beekeepers often use hive beetle traps filled with cooking oil as a preventative treatment measure. Another remedy that she employed was the use of Swiffer pads at the top of the hive which traps the beetles. Small hive beetles have been linked to colony collapse so early and persistent treatment is needed.

She also used a calming spray. I found a link (from GardenFork.tv) on a DIY version of the calming spray that can be used instead of smoke, in the photos you may notice that I had my smoker, but it was too damp and I had a hard time keeping it lit, so long live the spray. 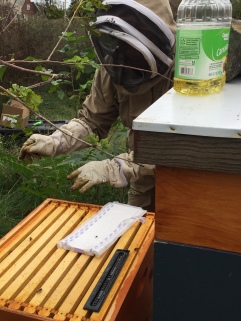 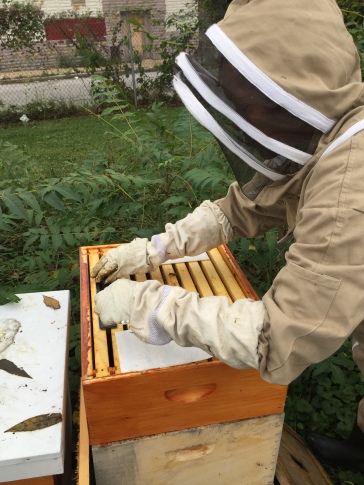 The tools for the day

Below are some more shots of the frame removal and placement into a storage container. The frames will be taken off-site for honey extraction. In the near future, I hope to share a post on the honey extraction process.

Pulling out a frame of honey

Getting rid of the bees from the box

Taking the box offsite for extraction

Well, I hope that you find this information on the honey collection and small hive beetle treatment informative. I will post again soon with more bee adventures.