So there not much to this post but I went to check on the hives early on Saturday morning. The bees were inside like expected and nothing much to report since I was the dumb one taking photos in the snow…

In my rush this week, I did not install my mouse guards or add the bee candy as planned. But, I got some work done on freezing frames from the other hives and gathering donated local wax. I will share this in another post.

With the changing of the season officially, I will start to focus on the inside aspects after finishing up the last few chores. A good thing is that the ground was still warm and this snow should melt within the next day or two. The weather report shows that it will get into the forties this week which will allow me to get these last task done, but I thought that I would share the nice snowy shots on the site.

Below are some photos of my house later in the afternoon. It snowed all day and we got a few inches of snow but we lucked out with the pavement being warm so no shoveling 🙂 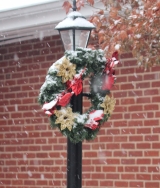